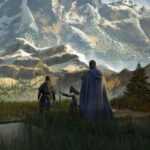 Embers Adrift is an indie PvE MMORPG developed by Stormhaven Studios and released in 2022. It was previously known as Saga of Lucimia.

The game is focused on group-based gameplay, exploration, and community, drawing inspiration from experiences in tabletop games and early MMORPGs.

The game offers a low fantasy environment with no quest hubs, minimaps, or railroads. Embers Adrift’s main appeal comes from the fact that it is a sandbox, allowing players to create their own adventures and stories with the tools given.

One of the key features of Embers Adrift is its group-based gameplay, where players are encouraged to overcome challenges with friends and allies instead can going alone.

However, the game falls short in several areas. The combat and gameplay feel very slow and grindy, lacking excitement and engagement. The variety of mobs is also meager, making the world feel repetitive and uninteresting. The low fantasy world also makes the game feel like a low-budget EverQuest without any excitement.

Grouping is not required in Embers Adrift, but it is highly recommended, as it allows players to access locations they couldn’t reach on their own. The game avoids hand-holding and even encourages the players to take notes as you have no minimap to go by.

In terms of quests, Embers Adrift’s quests are more about grand adventures and less about simple fetch quests. The quests are tightly connected to the world and its lore, giving Embers Adrift a unique flavor.

Players can choose between three roles – Tank, Damage, and Support – each with three additional specializations. You can switch specializations or roles, but you will lose all progress in the specialization or role you switched away from.

The lore of Embers Adrift is set in the Old Kingdoms, the Darklands, and Newhaven, where ember is a rare and powerful substance. A war broke out over its possession, causing many people to seek a safe place to live in peace, away from the looming threat of the Darklands to the north. The players are among the few who instead made it across the Darklands to Newhaven.

The story and lore are woven into Embers Adrift in a very subtle way, allowing players to explore and learn more as they progress. The world feels unique, but the blandness of it all still leaves something to be desired.

The low-fantasy setting is very low-fantasy. Humans are the only race. No armors or weapons look even slightly interesting, and almost all the mobs in the game are various animals. There is no magic, but players can use alchemy to make different potions and combat items.

The graphics and visuals in Embers Adrift are as bland as the setting. Everything looks very brown, gray, and dull.

The game is also poorly optimized, with slow load times and lag, which can frustrate players.

There is no way of knowing at the moment how big the population of Embers Adrift is, as the game isn’t on Steam and hasn’t released any official numbers.

In-game around the release of Embers Adrift a few months ago, the game was packed with new players, and still, enough players are playing to make finding a group pretty easy.

No, Embers Adrift is something as rare as a buy-to-play game with a monthly subscription. The game costs $39.99 upfront with a $9.99 monthly fee, which feels incredibly expensive for such a niche game in 2023.

The plus side is that the developers have stated that they will never introduce microtransactions, cash shop items, pay-to-win mechanics, or loot boxes.

No, Embers Adrift is not pay-to-win. All gear and items in the game are acquired by playing the game, and there are no microtransactions or cash shop.

Embers Adrift is a game that offers a unique experience in today’s MMORPG market, focusing on group-based gameplay, exploration, and community, and an immersive and meaningful gaming experience.

However, the game falls short in terms of gameplay, graphics, and overall excitement. The high subscription fee, poor optimization, and bland, low fantasy world may be too much of a deterrent for some players.

The lack of microtransactions and social aspects of the game are the only positive aspects.

The game may appeal to those who enjoy slower and more grindy gameplay and those who appreciate the social aspect of group-based gameplay and community building.

Have you tried Embers Adrift? What do you think of the game? Let us know in the comments below! We’d love to hear your opinion.