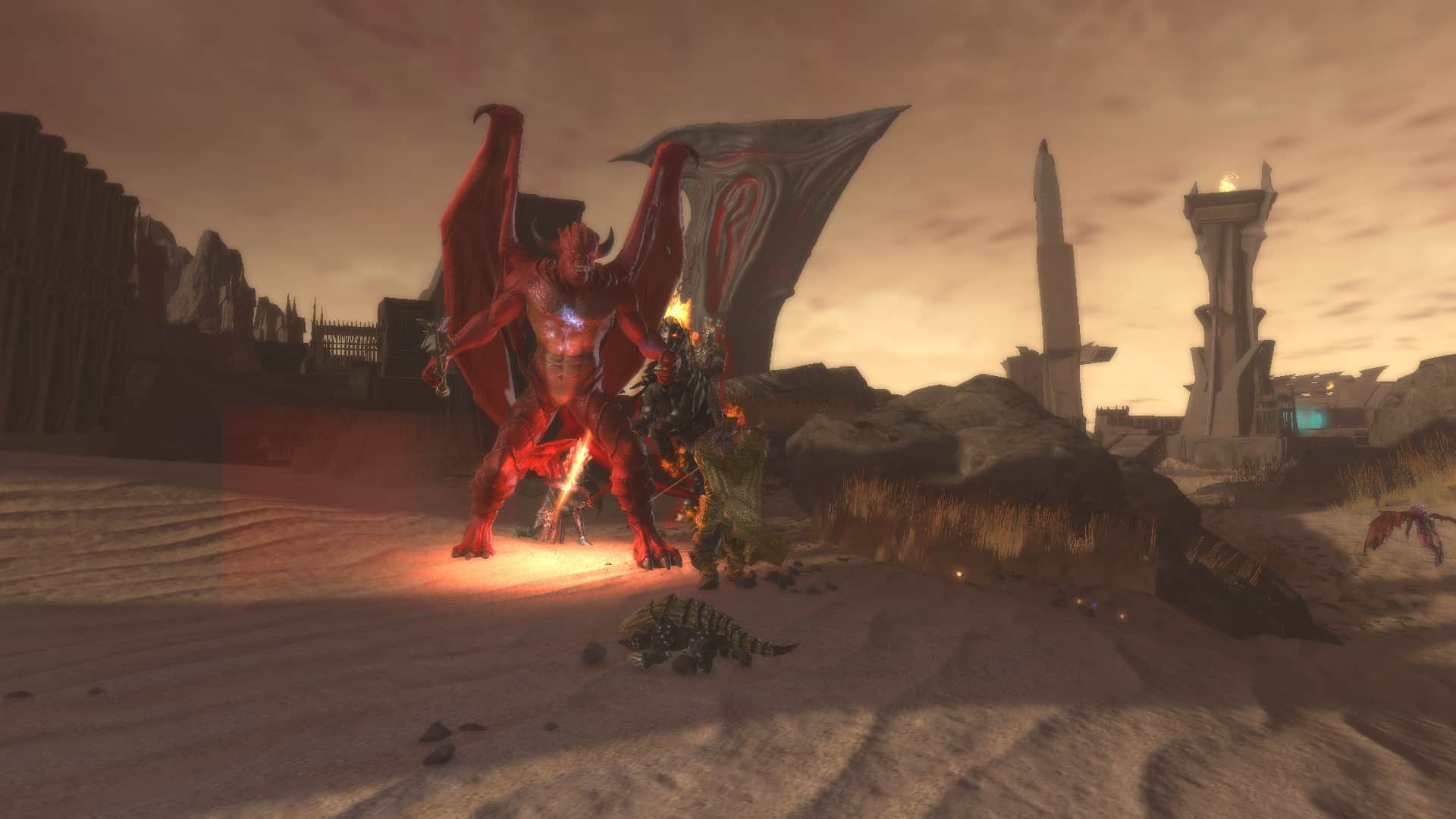 It’s been eight years since the initial PC release of Neverwinter and five since the console release, so how is Neverwinter holding up? I played the game from start to max level and beyond to find out.

My first encounter with Neverwinter was at the release back in 2013. Being a big fan of Dungeons & Dragons, and all the previous games set in the Forgotten Realms, I had high hopes for the release.

At the time it turned out to be a decent game and ended up being a sort of secondary MMORPG to my main ones which were WoW and Everquest at the time. Neverwinter was fun to occasionally play with a small group of friends and maybe clear a few dungeons together.

One of my biggest problems with Neverwinter initially was that it didn’t feel like Dungeons & Dragons at all. Especially the combat which is more like an action RPG feels misplaced in a D&D game.

The world also feels very small and cramped since you click on the map to travel from zone to zone. It just doesn’t feel like a big open world, it feels like a series of small zones where you can only move where the developers want you to.

Most houses or buildings in the game also have no functions and can’t even be entered except for a few in the city of Neverwinter and in the quest hubs. This also makes the world feel like the MMO equivalent of a western movie set.

Every zone in Neverwinter is instanced with only room for 20 players which also ruins immersion a bit. When more than 20 players are in a zone at a given time, a new version of that zone is created. Often tens or even a hundred of the same zone are active at the same time.

Over the years I have returned sporadically to try new expansions or modules as they are called in Neverwinter.

There have been a lot of these modules in Neverwinter in its eight years of existence. 23 to be exact.

These modules have ranged from fantastic (Storm King’s Thunder) to downright terrible (The Heart of Fire).

This is a common issue with MMORPGs, and you often end up playing in periods when the game is good.

So then the question is, is Neverwinter good now?

The story of Neverwinter follows the Forgotten Realms campaign setting for Dungeons & Dragons, which has millions of fans all over the world. It was brought into the video gaming mainstream with games like Baldur’s Gate, Icewind Dale, Neverwinter Nights, and countless more.

A new story arc is introduced to the game with the release of new modules. The latest module is set in Dragonbone Vale, where players are tasked with hunting down the mysterious Cult of the Dragon.

Earlier modules have been set in all over the realms from the frozen plains of the Icewind Dale to the Jungles of Chult, and unless you pay to complete these modules through the Zen store, you will have to spend quite some time in each of these locales to gain boons which will improve your character.

Some modules and areas are very fun and engaging while others feel rushed and even incomplete. The main area of Avernus is basically just a reskinned version of the Guild Stronghold Map, which ruins the immersion a bit for me personally.

Leveling in Neverwinter is much faster than it was if you go back a few years, and it is most enjoyable and engaging if you are playing for the first time. Reaching level 20 can be done in a day or so, but don’t think the grind is over at this point. It has just begun.

Recent updates have made Neverwinter less grindy, but you should still be prepared to spend months playing to reach any sort of end-game unless you are prepared to sink some money into your character.

You have to grind to get your boons, gear, mounts (which are very expensive), companions, and then of course artifacts and enchantments which will take a long long time to level to the highest ranks.

A lot of this content is time-gated as well so you have to come back and progress a little every day.

This does open up for quite a lot of theorycrafting and meta which is one of the strengths of Neverwinter. I really enjoy this part of the game. There are a lot of different skills, items, and systems you can use to bring your character to the next level.

If you come to Neverwinter as a hardcore MMO player or as a raider from WoW or any other game, it will feel like there isn’t much in terms of true end-game.

Trials only take about half an hour to complete and consist of just one boss encounter with no trash. Epic dungeons generally take less than an hour. Only the trials and dungeons from the latest couple of modules will provide any real worthwhile reward to challenge, which makes it feel like there isn’t really much of an end-game to speak of in the traditional sense.

These trials and epic dungeons tend to be very hard though, often impossible for PUG’s so if you are the type of player who enjoys tough challenges, this is definitely a plus as the dungeons are well designed and fun.

If you enjoy solo play, doing dungeons are in no way required in Neverwinter. You can still reach high item levels with gear obtainable from solo play.

Generally, it’s just a gear set, weapons, and a few other items that you only get through high-end dungeons. Slightly less or sometimes more powerful gear can still be obtained through other means.

So now you might be asking yourself, is Neverwinter pay-to-win? Its business model is as a free-to-play game with an in-game shop. The base game is free and so are all the modules.

The only thing that you can optionally pay for is the Zen currency which will buy you almost everything in the game from mounts to companions and various services.

All mobs in the game will also drop lockboxes, and keys to these are only obtainable from the Zen store. These can be addictive to buy as you can get some very rare rewards from these.

You can also exchange Zen for Astral Diamonds which is the main currency used on the Auction House in Neverwinter, and on the AH you can buy almost everything, so although you can get everything in the game without spending a penny, I would still say it falls in the category of a P2W game.

Who is the game for?

MMOs are often hard to review since players look for different things in games. If you like big open-world sandbox MMO I would say Neverwinter is not for you.

If you want to grind a few hours a day in a pretty casual MMO with an engaging action combat system, then I would say give it a try. Especially on Xbox or Playstation, the game works well due to there not being a ton of skills and abilities to press.

It’s also a great game for players who enjoy theorycrafting and don’t mind a bit of a grind to reach the end goal.

There are no official numbers on the population of Neverwinter, but MMO-Population.com estimates it at around 160k daily players.

Neverwinter peaks out at about 3000 players on Steam, but it does seem like the majority of players play through the arc launcher and not on steam.

Most zones in current content modules have hundreds of players at all times, so I would say the player population is healthy and you should have no problem finding friends or a guild to play with.

As with many smaller MMO communities, Neverwinter has a generally helpful and friendly community. The Neverwinter Reddit is active as well and you can usually find answers to most of your questions there.

I landed at a final score of 7,5/10 for Neverwinter, and it might be worth playing depending on the type of player you are. The score might go up with the next module release or it might go down, only time will tell, but for the time being Neverwinter is a decent game to sink a few hours. It’s hard to argue for Neverwinter being your main game though, it’s just more side-game material.

What do you think of Neverwinter, let us know in the comments below!

I quit playing neverwinter over a year ago and will never go back. I had all the best stuff i could get and still couldnt solo for crap. They didnt even have any new gear or items to help level up my character. If you ask me its a trash game that deserves to be shut down and The devs should give people their money back. To me it is a pay to win game and that is also b.s. no one should waste their time and money on this game.

I play this game daily and have been from the start. This game is P2W. You CANNOT GET TO NEW DUNGEONS AND TRIALS without spending money! Chris whiteside the former EP totally destroyed the progression system meaning you cannot naturally progress to new dungeons and trials !!!

Only way to get there is to spend money or have someone carry you(warning BIS players are a closed community.. aka .. play our way or you are not welcome)

Neverwinter have recently got a new EP (3rd since Chris Whiteside fiasco ... less than 2 years) and i must say he is trying. I do not agree with everything he is doing but he seems to be trying to make the game enjoyable again. Personally i think the game need a staff overhaul. When devs make comments like "not meant for everyone" (speaking about trials) and Lazy ranged players, that does not lead to the player base trusting the devs. Especially if they favor their friends and there is a "private" [preview of all new content for select friends ... err i mean select bis only players!!!

Hello, I was playing Xbox Bless Unleashed since the beginning of the covid-19. Now it's probably about to shut down. After trying NW I like it because of new quest content. With BU. at lvl 45 their is no new quests and it's just rinse and repeat kill bosses and dungeons.Meh. So with NW being new it's fun. So What do you think it better than NW on Xbox?

@Michael, It sucks for soloing thats for sure. Just before i quit playing i couldnt solo anymore for anything. The game just got harder and harder to play.

Bugs everywhere. Not worth your time until the dev team gets their stuff together.