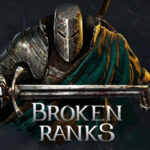 Broken Ranks, the isometric dark-fantasy MMORPG from Whitemoon Games was released this week. Despite it not getting much attention during development, the title managed to attract a lot of players for launch, which caused some initial issues, but most of these have been fixed and we have enjoyed a stable experience for the last couple of days while exploring Broken Ranks.

At first glance, the most apparent thing about Broken Ranks is the similarity in graphics to old-school Infinity Engine RPG classics such as Baldurs Gate, Icewind Dale, and Fallout, and newer titles such as Pillars of Eternity, so I think its safe to say that a fair chunk of the player base in Broken Ranks will be players with a certain sense of nostalgia towards these types of games.

While the looks of the game clearly have drawn inspiration from these classic RPGs, not much else has been copied. The world of Broken Ranks feels very unique, and as far as RPG settings go, I feel like I’m actually exploring a new and unique world.

Another unique feature of Broken Ranks is the combat system, which has been inspired by a different game and actually a different genre, namely Heroes of Might and Magic. As primarily an MMO player, it took some time to get used to the turn-based combat system.

The combat system quickly grew on me though, and if you look at it in the context that the game will be launching cross-platform for mobile devices in the future, it’s actually a pretty good system for grinding casually on your phone. I’m not a huge mobile gamer, in fact, I’ve never played an RPG on my phone or tablet, but I am quite looking forward to having a game like Broken Ranks to grind on my commute.

For the first few levels, combat seemed a bit unbalanced and not very rewarding. It felt great to win tough battles, but most battles felt really unrewarding in terms of XP and loot. Death felt most just annoying, especially since there is so much running back and forth as part of the quests already, so when you factor in dying, it ends up being a bit too much running around the map.

At around level 7 though, you will get a pet dog that will help you out a great deal, and combat starts feeling more rewarding and fun.

The different areas in Broken Ranks are beautifully made but most of them feel a bit cramped. I’m guessing this is due to the fact that it will be available cross-platform and I can imagine that they will work well on mobile compared to a large 4K resolution PC screen.

Like with the combat, the areas become more interesting as you level, but I do wish that there were even more things to interact with in the environment and bigger areas, especially dungeons to explore. One of the greatest features of games like Baldurs Gate was the big maps with tons of little areas to explore.

All the artwork in Broken Ranks including the environments, the hand-drawn intro movie, and the character portraits combined with the unique game world, gives the world a fantastic atmosphere that I haven’t experienced in the MMO genre before. The music is also quite good and does a great job of adding to this atmosphere.

It seems to me that Broken Ranks isn’t trying to be something it isn’t. It isn’t trying to compete with the giants of the MMO genre. The character creator is a great example of this. It might not have all the bells and whistles of big-budget AAA games, but by enhancing its great artwork and design, the developers have managed to make a great character creator that suits the game perfectly.

And since Broken Ranks isn’t trying to compete, or to make a “WoW or FFXIV killer”, it stands out as something quite special in the MMO space. A casual friendly MMORPG with an emphasis on great art and atmosphere.

After my first play session of Broken Ranks, I wasn’t planning on playing it anymore, at least not for a while as I don’t have much spare time, but the game was in the back of my mind, and later in the evening I had to get in another session.

Broken Ranks will probably never be my “main” MMO, but rather a great secondary MMO that I can play when I want a break, especially when it gets its mobile release.

Broken Ranks does have a few flaws. The UI isn’t my favorite and I’ve had some issues with the keybindings. Mostly due to the fact that the C button is bound to highlight character names on the map, and can’t be unbound or changed. It’s a feature of the game which I’ve only used a couple of times so far, and I wish I could assign C to open the character screen instead.

Another minor issue with the key bindings is that if you press M you will bring up the map window, but pressing M again doesn’t close the window, it simply opens the map again, which means that you will have to move your mouse over to close the window or press escape.

Another thing I find quite strange is the Equipment AND Attributes windows. Both of these windows show your stats, and I don’t see why these windows haven’t just been combined into one window.

Despite its flaws, which are all quite minor, Broken Ranks feels like one of the most unique additions to the indie MMO scene in a long while. By having drawn its inspiration from elsewhere than the MMO genre, the devs at Whitemoon Games have succeeded in creating a new and exciting game that should appeal to MMO gamers, RPG gamers, and someday in the not too distant future, mobile gamers as well.

Oh yes, if you want that your money is stolen play this game. They have stolen my money for platinum and there are many players with the same experience. It is the worst game "support" ever. You have no way to complain as people who take complaints are game friends playing in same clans. So, as a player you can't win and they abuse their positions knowing that there is no consequences. Worst game to play, do it only if you want to waste your time and lost your money.

Good base game, but it's not an MMO in any way. The Battle system is interesting, truly. However, calling it an MMO is a disservice to the genre. If you party with people for grinding it's great! The second you need help on a quest it breaks. This game is NOT friendly if you want to quest with someone else, which should be a staple of an MMO. The second you bring someone into a quest, it might break, you might need a mod who, days later, might respond to you. But besides that, quests do NOT resolve in a party. You will have to do it every time for every member.

@Cy, The Game itself, I mean the story is nice but it is full of bugs and unbalanced. The worst is the way that Whitemoon treats the players as potential frauders. I play this game for many years started on Taern (first 2D version), the BR predecessor and I see that most of the players constantly complain about how the studio admins deal with them. Sadly it seems that owners don't take those feedback seriously and nothing has changed since.

I reached lvl 24 so far and it's been the greatest gaming experience of few last years to me. The greates game changet was forming a proper team with two other players, playing together day by day made the game way more enjoyable.