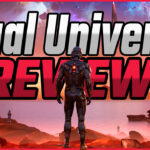 Dual Universe is an ambitious massively multiplayer online game that aims to offer players a vast open-world sandbox experience. The game is set in a shared universe where players can explore, build, and create unique stories.

Novaquark is the developer of Dual Universe. They are an independent game development studio based in Paris, France. Founded in 2014 by Jean-Christophe Baillie. Novaquark calls themselves “The Metaverse Company” which, at this point, should start off some alarm bells.

The game’s focus on player-driven economy and politics allows for a unique and dynamic gameplay experience. Players can design and construct their own spaceships, vehicles, and structures and participate in player-run corporations and governments.

The game is set in a seamless and persistent universe where players can interact with one another, trade resources and goods, and form alliances and rivalries.

However, despite its ambitious goals, Dual Universe has been met with mixed reception from players and critics. The game has a low concurrent player count on Steam, with an average of 109 players over the last month, indicating a lack of player engagement. Additionally, the game has received mixed reviews on Steam, with many players citing a lack of polish and many bugs and glitches.

The game’s development has also been a topic of controversy, as the game raised $565,000 on Kickstarter and a total of $21 million in funding. However, despite a large amount of funding, the game has been criticized for lacking content and features promised during the fundraising campaign.

Compared to other space simulators like No Man’s Sky or Elite Dangerous, Dual Universe falls short in polish, features, and overall player engagement.

Many already consider the game a “dead game” just months after its official release, with a lack of development updates and new content releases.

The graphics in Dual Universe are decent but not particularly impressive. The game features a plain but realistic art style. The game’s lighting and particle effects are okay, but nothing particularly noteworthy. The game’s space environments are also decent, but they lack the level of detail and realism seen in other space-themed games.

Additionally, the game suffers from some graphical bugs and glitches, which can negatively affect the visual experience. Some players also reported that the game’s performance is not always stable, resulting in frame rate drops and stuttering.

The sound design in Dual Universe is generally good. The game features a wide range of ambient music and sound effects that help to create a believable and immersive environment. The sound effects are well-produced and add to the game’s overall atmosphere.

The population of Dual Universe is generally considered to be low. The game has an average concurrent player count on Steam of only 109 players over the last month, indicating a lack of player engagement.

No, Dual Universe is not Free-to-Play. Dual Universe utilizes a subscription model for its players. Players must pay a monthly fee to access the game’s content and features. This subscription model has been a point of controversy among players, as some feel that it limits the game’s potential player base and limits accessibility for casual players.

In Dual Universe, players can spend real money to acquire the game’s in-game currency, Quanta. Quanta can be used to purchase in-game items and resources. While the game can be played without spending any real money, the option to purchase

Quanta can give players an advantage in the game’s player-driven economy and politics. This can be seen as a way for the developers to generate additional revenue, but it can also be seen as a form of pay-to-win.

Dual Universe is a game with a lot of potential, but it has failed to live up to the expectations set by its ambitious goals and a large amount of funding.

The game’s low concurrent player count, negative reviews, and lack of content and features suggest that it is already dead just months after its official release. While there’s always a chance for a game to turn things around, it looks like Dual Universe needs a lot of improvement to compete with other space simulators in the market.

Additionally, the game’s focus on player-driven economy and politics is a double-edged sword. On the one hand, it allows for a unique and dynamic gameplay experience, but on the other hand, it also requires a large and active player base to function properly. Without a sufficient number of players, the economy and political systems in the game become stagnant and uninteresting.

The game’s building system, while impressive, also requires a large number of players to be fully utilized. The building and construction of large-scale projects, such as cities and space stations, require a significant amount of resources and time. Without a sufficient player base, it becomes difficult to gather the necessary resources and manpower to complete these projects.

Have you played Dual Universe? If so, what are your thoughts on the game? Let us know in the comments!