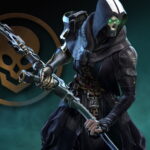 Skyforge is an MMORPG from Allods Team and Obsidian Entertainment back in 2015. It features a unique setting and an action-oriented combat system. The game is set in a science-fiction universe where players take on the role of an immortal hero who has sworn to protect their world from invading gods.

The game features third-person combat with a mix of targeted abilities and hotbar skills.

In addition to being available on PC, Skyforge can be played on Playstation, Xbox, and Nintendo Switch.

Players often compare Skyforge to other MMOs, such as TERA and Guild Wars 2, due to its gameplay style and class system design similarities. In this Skyforge review, we’ll look at the game’s current state: what makes it unique, what’s still missing, and whether or not it’s worth playing in 2022.

Players can play as immortal god-like characters. In the game, there are 18 classes. But players can only choose from one of the three classes (Lightbinder, Paladin, and Cryomancer) initially. Then you have to progress in the game or pay to unlock more classes.

The game also allows for players to customize their characters through the use of armor sets and cosmetic items. Skyforge also offers a decent range of PvE content, including raids, dungeons, and more. At the maximum level, though you will mostly just grind the same content over and over, with little new content being added by the developers.

You’ll fight against enemies in real-time. You can heal your allies and use melee or long-range attacks. The game features a vast array of weaponry at your disposal-from swords to pistols to bows.

In addition to these systems, a unique element called “Divine Form” allows players to boost their stats temporarily.

Once the player finishes the campaign (story) the game becomes very grindy and which is no doubt to get players to pay up for some power.

Skyforge has some decent visuals, featuring interesting environments and some cool character models. The graphics are nothing special compared to other MMORPGs, but it still looks decent and runs smoothly on most systems.

This means that the game runs well on the Nintendo Switch as well.

The game also features various enemies and monsters, ranging from human-like soldiers to giant robots or alien creatures. The game’s art style is very colorful and vibrant, making for an enjoyable experience to explore, at least for a while.

The sound of Skyforge is a mix of high-tech, futuristic elements, and classic music.

It is atmospheric, with a hint of tension. The music is soft and calming but with an undercurrent of tension that builds as the game progresses. It’s a pleasant sound that doesn’t distract from the gameplay but enhances it.

The sound effects are also well-done. The sound of weapons firing, enemies attacking and dying, explosions, and other products all fit nicely into the overall atmosphere of Skyforge.

The voice acting in Skyforge is cheesy and uninspired. The characters sound like they’re reading from a script and lack real emotion. The dialogue isn’t particularly gripping, but it is serviceable enough to get the job done.

The population in Skyforge is in decline as players move to other games. So to enjoy Skyforge as a social game you might want to find a guild or play with a group of friends.

Other smaller MMOs manage to stay alive due to the players being friendly and dedicated to the game, but in Skyforge it seems that the player base is neither.

The population of Skyforge has an average of 36.7 players as of September 2022, according to Steam charts. This is a 10X decline since early 2021 when the game averaged 319 players. By the looks of it, Skyforge is dying, at least on PC.

Yes, Skyforge is free-to-play. You can download the game on Steam and play the full version without paying anything. However, it does have microtransactions.

Skyforge is a pay-to-win game because it can become extremely powerful faster through spending money, even if it’s strictly not necessary.

Skyforge certainly can be enjoyable, at least for a while if you want some casual fast-paced grinding action with a friendly community.

That said, Skyforge has been stuck in a loop of content for years now and doesn’t seem to get much attention from the developers, meaning there is no real progression or endgame to speak of.

The low population is another drawback, but you can overcome it by playing with friends or doing activities that do not need other players.

Skyforge also might be worth picking up if you are looking for an MMO to play on the Nintendo Switch, as the selection of MMOs on the platform is limited.

Have you played Skyforge? Let us know in the comments!