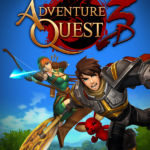 So, does AdventureQuest 3D live up to the hype? Is it worth playing? In this article, we will take a close look at the game and answer those questions.

In this review, we will judge AQ3D as an early access game and a game targeted at mobile players and a younger player base, not as a competitor to the major MMOs out there.

AdventureQuest has always been a bit of a quirky game. It is known for its simple graphics and lack of serious gameplay. However, it has always had a decent and loyal following, mostly consisting of younger players.

AdventureQuest Worlds was released in 2008 and was successful. So, when Artix Entertainment announced they were making AdventureQuest into a 3D MMORPG, there was a lot of excitement amongst the fans of earlier Artix games.

It does seem like maybe some of the things that made the 2D versions of AdventureQuest have been lost in the 3D version and it does feel a bit more like a generic fantasy MMORPG at this point.

The gameplay in AdventureQuest is mostly quest-based. You will receive a quest, usually from an NPC, and then go out and complete it. The quests are generally simple fetch quests or kill quests. However, there are also some puzzles and other types of quests to keep things interesting.

The quests are all very straightforward and easy to follow. There is very little grinding required to level up your character, and you can do it mostly by just following the main storyline. It gets a bit tedious after a while, so I wouldn’t recommend doing it in long stretches.

Humor has also been one of the biggest selling points of AdventureQuest. The game is filled with puns and other types of jokes, and almost no part of the game takes itself too seriously.

The graphics in AdventureQuest 3D are simple, but they work well for the game. The world is colorful and there are many different areas to explore. Since the game is targeted at kids, keeping the art style simple and fun makes sense.

The characters are cartoony looking, in an anime-inspired style with big eyes and spiky hair. The armor and weapons are oversized and spiky, clearly inspired by games such as World of Warcraft.

Many of the locations in the world are pretty cool, and the environments are also stylized in a WoW-Esque style.

So is AQ3D dead or alive in terms of population. Well, the population is not great but it is stable. Artix and their games do have a small following, and since the game caters to a niche market they’ve managed to maintain a player base.

The game has about 300 players playing through Steam at all times, and you will often run into other players in the game world.

AdventureQuest 3D does have some drawbacks, however. The biggest one is that it is not a very deep game. There is not much in terms of character customization or player choice. The quests are all very linear and there is no room for exploration.

Overall, AdventureQuest 3D is a fun game that is worth playing. It is perfect for younger players or for people who want a casual and straightforward MMORPG experience. The community is great and the developers are always adding new content. If you are looking for a deep and complex game, however, AdventureQuest is not for you.

AQ3D will never be the main game for hardcore MMO fans as it cannot be compared to major titles such as World of Warcraft, Everquest, or Elder Scrolls Online. That doesn’t mean it’s a bad game though and if you are just looking for some casual fun that can be had crossplay between PC and mobile, or if you are a younger player or perhaps looking for an MMO to play with your kids, AdventureQuest 3D might be worth looking into. Just don’t go in expecting anything too serious.

AdventureQuest is available on PC, Mac, iOS, and Android. The game is free-to-play with an in-game shop and an optional subscription called the Guardian Package.

If you are looking for a fun and casual MMORPG, AdventureQuest 3d might be worth checking out.

Have you played AdventureQuest 3D? What did you think of it? Let us know in the comments below!

I beg you not to play this game , I've played it extensively for months , it's full of bugs , which the development have laughably used the line "we don't go back to content implemented unless we have to" (this includes bugs , this means unless it's a bug affecting their revenue, it isnt getting fixed generally) also fuller updates are a constant theme with updates of any substance once a year at best , usually riddled with bugs , the mobile client is terrible, they allow players to suggest other players commit suicide over difference of opinion (bare in mind children play) the early game is outdated an awful , the endgame is limited and bug riddled , please don't make a mistake , run for the love of God run.