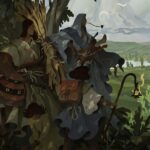 Book of Travels was released last year by the Swedish developer Might and Delight. The game sends the players to a magical land called the Braided Shore. Instead of focusing on thrilling action and fast-paced combat, Book of Travels is about relaxing and exploring the world at your own pace.

Book of Travels isn’t an MMORPG but a TMORPG, a term Might & Delight coined themselves, meaning Tiny Multiplayer Online Role Playing Game.

While Book of Travels isn’t technically a true MMO, it shares many aspects with the genre that has made MMOs so popular. Book of Travels features an open world for players to explore, and while the Braided Shore isn’t teeming with other players, you’ll meet a few on your adventures.

Book of Travels has drawn inspiration from various sources, not just video games. The Moomins, Studio Ghibli, Baldurs Gate, and artists ranging from A.J. Casson to Waterhouse have all influenced the game in one way or another.

Book of Travels is an early-access game, so while it’s already available to play, there are still a few features and updates planned for the future, before the game is fully released.

The game is broken into periods with early access being “Chapter 0”. Once the game is released “Chapter 1” will begin.

The gameplay in Book of Travels is very different from every other MMO on the market. Rather than focusing on completing quests or grinding for levels, Book of Travels is all about exploration and casual gameplay. You can spend hours wandering the Braided Shore and still find new things to discover and experience.

Might and Delight recommend players play the game with a pen and paper ready to write down hints and clues instead of looking up answers online. Book of Travels is all about the journey, not the destination.

Another unique feature is the chat system which is done entirely by emotes. There is no text chat system in Book of Travels, and instead, players are encouraged to interact with each other using various emotes.

The gameplay in Book of Travels is engrossing and relaxing, but it’s not for everyone. You will have to take everything you know about traditional MMOs and put it away while playing Book of Travels. You have to be able to set your own goals and maybe not even have a goal at all.

Book of Travels has some of the most unique graphics in any MMO. The game is a hand-painted diorama.

Instead of drawing inspiration for the look of the game from other video games, Might and Delight have been inspired by various artists, including Érik Desmazières, Jiri Trnka, Arnold Böcklin, and AJ Casson to name a few. This has resulted in a truly original and breathtaking look to Book of Travels.

The soundtrack for Book of Travels has been composed by Ulf Wahlgren.

The music has been inspired by classic RPGs but also classic music from all over the world and history including Ottoman music and traditional music from Armenia, Greece, Turkey, and Iran.

It is an amazing soundtrack that perfectly complements the graphics and feel of the game.

The population in Book of Travels is very small with only a handful of players concurrently playing on Steam according to Steam Charts. This should not discourage anyone from trying Book of Travels though as the social aspects of the game is very unique, and running into other players is a pretty rare occurrence anyway.

Is Book of Travels Free-to-Play?

Book of Travels is a buy-to-play game that is available on Steam.

Is Book of Travels Pay-to-Win?

No, the point of Book of Travels is not to win but to explore and relax, so there are no elements of pay-to-win.

If you’re looking for an immersive, relaxing MMO to play, Book of Travels might be right for you. With beautiful graphics, a rich soundscape and non-traditional gameplay elements, Book of Travels is a new way to experience an online RPG. However, the game is not for everyone, so be sure to spend some time reading up on Book of Travels before diving in.

Have you played Book of Travels yet? What did you think of it? Let us know in the comments below!