Tired of MMOs that send you on a predefined journey with no possibility of experiencing personal adventures and comprehensive crafting? Then you might be looking for the best sandbox MMORPGs.

We have prepared an inclusive MMO list with titles each having a unique take on the sandbox genre.

This is an isometric MMORPG that takes place in a fantasy universe. Players will discover an open world that presents a multitude of opportunities. From the character system to content, Albion Online screams sandbox.

There are no classes in this game. Your playstyle depends on your equipment and tools. Craftable items range from simple tools to buildings.

Albion Online doesn’t have a main quest line or side adventures. It has a task system but you won’t find chain story scenarios like in World of Warcraft or Final Fantasy XIV. It’s up to you if you play as a PvPer, farmer, or monster hunter.

EVE Online is that game everyone praises but tells you to stay away from it. That’s because the learning curve is steep and the player base is not the friendliest.

EVE Online is a space MMO that puts you in the seat of a ship pilot and throws you into a massive universe featuring more than 7,000 solar systems.

The ship customization options are generous, to say the least. More than 350 ships, each with its customization, are available. You can mine, you can battle other players, you can go against computer-controlled enemies, and you can explore. Whether you find it fun or not, depends on your preferences.

NatureCraft is a Minecraft MMO server. We all know that, when it comes to sandbox gameplay, Minecraft is the game to rule them all.

NatureCraft is an MMO re-imagine of planet Earth on a scale of 1:1000. Free crafting and player interaction sit at the core of NatureCraft’s gameplay.

Find a group of players and build your own country if you like. Explore the world as you construct a vast railway system to connect all seven continents. If you ever feel like the stars are calling, build a spaceship, and travel to the Moon and Mars.

NatureCraft also has traditional MMORPG features such as quests and boss fights.

The year is 3301 and the galaxy is not a welcoming place. The open world is a recreation of our very own Milky Way. You can explore maps based on real stars, planets, and even black holes.

Players’ actions have the power to shape the world. They customize their space ships to better suit activities such as mining, fighting, smuggling, and exploring. Play as you wish thanks to the game’s Solo Mode and the Open Play MMO feature.

Wurm Online is a 2006 indie MMORPG that has become a staple of the sandbox genre. It’s a game that puts players in charge. They can reshape the world as they see fit. If something is in your way, just remove it, and build whatever structure you have in mind.

The game supports free PvP and PvE. Players can organize themselves in kingdoms and wage war on each other. If you prefer crafting and exploration, the PvE servers will be more to your liking.

Wurm Online is a slow-paced game. It takes a while to get into it but it’s worth it if you are looking for a solid sandbox experience.

Mystera Legacy is a sandbox MMORPG with cute 2D graphics. It’s a game that can be played in a web browser or on an Android device.

The world is built and ran by the players. They create game structures such as houses, shops, and farms. You can harvest the produce from your farm and use it in the kitchen to make food.

Mystera Legacy has a skill-based leveling system that allows characters to become stronger. PvE features include dungeons with monsters that drop unique items. PvP is not missing either. Players are encouraged to join tribes and enjoy the game together.

SWGEmu is a Star Wars Galaxies private server. The official game ran from 2003 until 2011. This private server is legal because it doesn’t use the original game’s code.

Thanks to SWGEmu, players have the chance to create their adventure in the Star Wars universe. The game features an open world that’s under players’ control. The community is in charge of running the cities and the economy. Crafting is a major component because some of the best items are player-crafted.

A Star Wars MMO wouldn’t be complete without spaceships. Iconic vessels, such as the X-Wing, and a complex ship customization system are part of the game.

Boundless is a sandbox MMO with voxel-based graphics. The gameplay proposes a space adventure that gives players the chance to discover and colonize planets. Each world has a unique environment. Some planets are rich in resources, others make great hunting grounds, while some worlds are perfect for building massive structures.

Players may even establish a farm on alien land and see what grows from the exotic soil. The character system works in the same way. Players have the freedom to choose from becoming hunters, craftsmen, fighters, or politicians. The crafting gives players all the tools they need to create items and transform the world.

Pearl Abyss brings us one of the best-looking sandbox MMORPGs. Black Desert features an immersive open world that invites adventurers to explore it.

Thanks to the action combat, PvE and PvP activities are fun and engaging. Working with your guild buddies will get you far. Competing against other groups is also rewarding.

However, not all the content is based on combat. Players can also play instruments, decorate their homes, and grow crops on their farms.

Screeps has one-of-a-kind gameplay. This is a strategy sandbox MMO game for programmers.

Players oversee a colony. They are in charge of securing resources by harvest or trade, training units, and conquering territories. All these actions are performed with JavaScript and it’s the player’s job to write these scripts.

Your colony is just one of the many that exist in the same space. Interaction with other players is inevitable so you need to have scripts for that as well. In addition to JavaScript, the game supports other programming languages such as C#, Rust, and Swift. The developers are working to add more.

Trove is a voxel adventure MMO that has robust sandbox gameplay. The world is made of destructible blocks. If you don’t like the looks of something, just take it down, and reshape the blocks according to your vision. You can build yourself a nice castle or design a dungeon and invite other adventurers to test it.

Items are player-crafted as well. The character system features amusing classes such as dinosaur tamers and headless knights.

Combat skills are equally funny. For example, you can throw ice cream at your enemies. Trove has a funky game world with diverse locations such as the Neon City and the Habanero Seas.

Archeage is a fantasy sandbox MMORPG that’s perfect for those who are into building and crafting. The game offers you the skills and tools to create anything from simple items to castles. Not all resources are at hand so you might have to secure shipments of goods from the other side of the world.

Just be aware that some players like to play pirates and they will probably attack your ship. Massive PvP wars and open battlefields are part of Archeage. Settling down and unlocking a zone’s full potential is another way of playing the game.

Fractured is the sandbox isometric MMORPG where you don’t have to wait for levels in order to access the most fun part of the content. The unique progression system is based on reputation and skills.

This is not a theme-park MMO where you follow a preset adventure. Join a group of players and establish a city where you are the law. Grow the city into an economic or military empire and be prepared to defend it against incursions from other players. Or maybe it’s you that’s leading a raid on other players’ settlements. 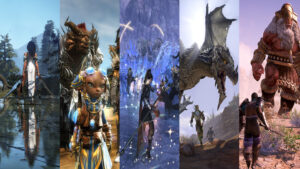 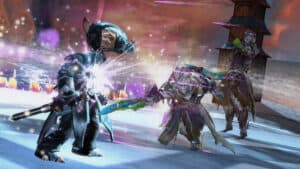 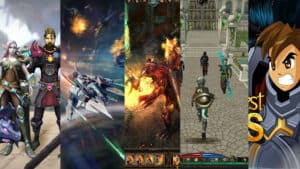 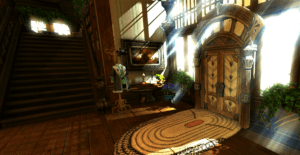