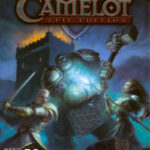 The game is set in the medieval fantasy world of Camelot and features three distinct realms, each with its own races and cultures, that players can choose to align with and play as.

At the time of its release, DAOC was a significant competitor for other popular MMOs such as EverQuest and RuneScape. It stood out due to its focus on player-versus-player (PvP) combat and large-scale Realm vs. Realm battles.

DAOC’s gameplay primarily consists of questing and player-vs-player (PvP) combat. The game’s realm vs. realm (RvR) system, in which players from different realms can engage in large-scale PvP battles, is a highlight and a unique feature of the game. The RvR system allows for intense, large-scale battles and gives players a sense of being part of a greater conflict.

One of the strengths of DAOC is its deep and immersive world. The game features a rich history and lore, with a detailed and believable fantasy setting. Additionally, the game’s character development system allows players to customize their characters in various ways, giving them a sense of ownership over their characters.

The setting of Dark Age of Camelot (DAOC) is heavily inspired by the legends and myths of Arthurian, Celtic, and Viking cultures. The game occurs in a medieval fantasy world divided into three realms: Albion, Hibernia, and Midgard. Each realm is based on real-world cultures, with Albion being inspired by Arthurian legends and medieval England, Hibernia by Irish and Celtic folklore and culture, and Midgard by Norse and Viking culture and mythology.

Players will be able to explore the vast world of Camelot and immerse themselves in the rich history and lore inspired by the legends and myths of these cultures. From the lush green forests of Hibernia to the rugged mountains of Midgard to the fortified cities of Albion, the game’s setting provides a diverse and detailed environment for players to explore.

Dark Age of Camelot features a traditional tab-targeting combat system similar to most older MMOs. The tab-targeting system is simple to understand and easy to learn. Still, it can also require skill and precision to be successful in combat, especially when engaging in player vs. player combat.

Dark Age of Camelot (DAOC) was released in 2001, and its graphics are certainly showing its age by modern standards. The game uses 3D graphics, but the models and textures are relatively low resolution, and the character animations are limited. The lighting and special effects are also fairly basic. The game’s graphics are definitely not on par with more recent MMOs and might not appeal to players who are looking for a more modern and visually striking experience.

However, it should be noted that the graphics were considered above average in 2001 when the game was first released; the game’s developer, Mythic Entertainment, put a lot of effort into creating detailed environments and creatures which were quite impressive for the time. Additionally, the game’s setting and atmosphere are well-crafted, and its world remains immersive even now, despite the outdated graphics.

The music and sound effects in Dark Age of Camelot (DAOC) are well-done and add to the game’s immersive atmosphere. The game features an orchestral and dynamic soundtrack that helps set the tone for different areas and events. The tracks fit the game’s medieval fantasy setting and help create a sense of adventure and epicness.

The sound effects in DAOC are also well-done, with realistic and detailed sounds for weapons and spell effects. They give a sense of immersion and realism to the game.

Dark Age of Camelot, like many other MMOs, has seen a decline in its player base over time. The game was highly popular in its prime, but as newer, more modern MMOs have been released, DAOC’s player base has decreased. However, the game is still updated and maintained by Broadsword Online Games, the company that took over the game’s operations. They’ve made several changes and updates over the years.

No, Dark Age of Camelot is not considered pay-to-win. Being a Veteran does provide a few perks, and some items, primarily cosmetics, can be bought through microtransactions.

Overall, Dark Age of Camelot is a solid MMORPG that offers a unique and engaging gameplay experience with a deep and immersive world. The game’s RvR system is a highlight, providing players with intense and large-scale PvP battles.

Dark Age of Camelot’s golden age is definitely over, though, as the game’s graphics and outdated mechanics are showing their age. However, the game still has a small but dedicated player base and community. It can still provide an enjoyable experience for anyone looking for an old-school MMORPG with some friendly competition.

Have you ever played Dark Age of Camelot? Share your memories and opinions in the comments section below. We’d love to hear from you!