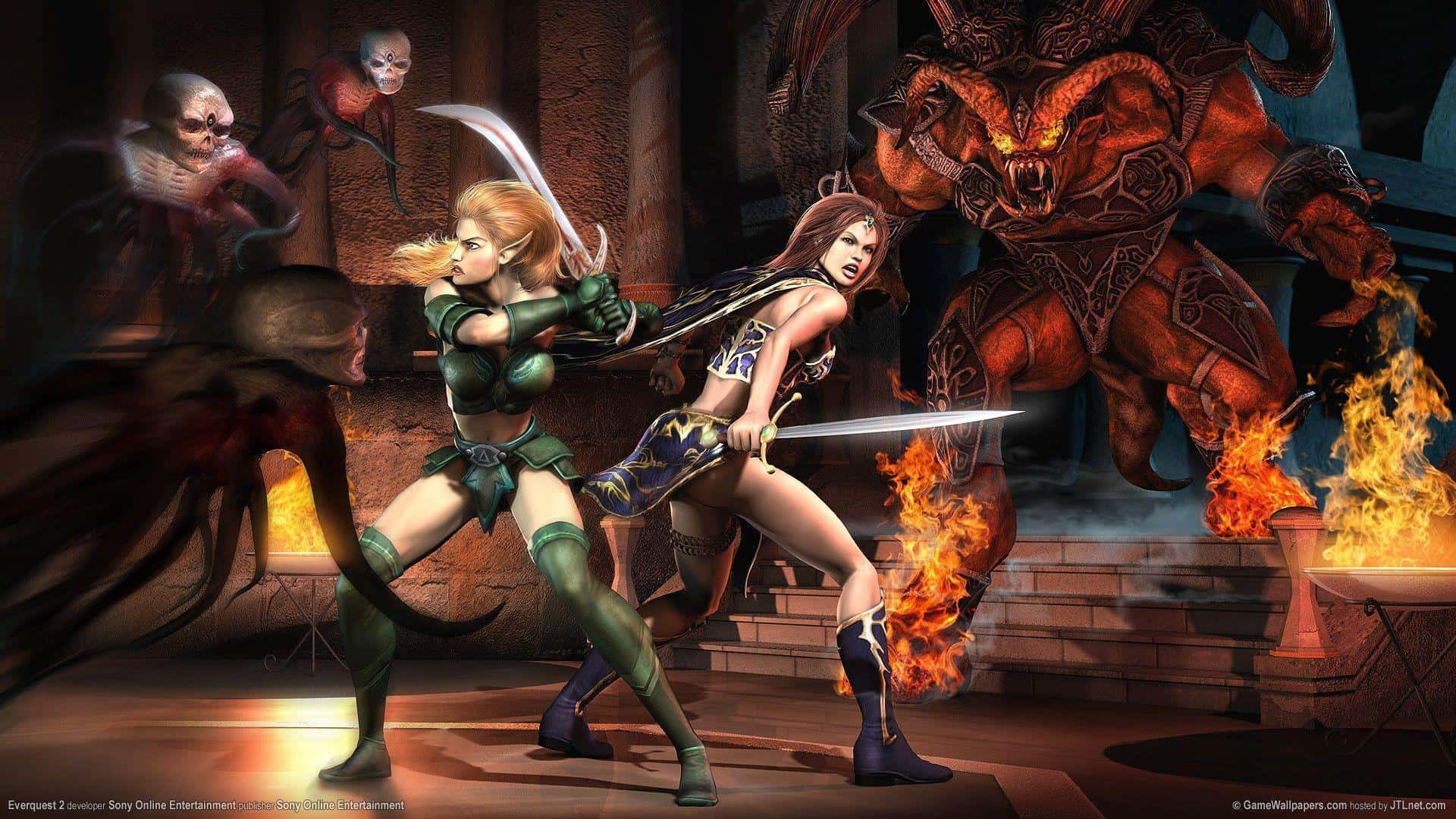 Welcome to the Everquest 2 news hub on MMORPG.GG. Here you can find the latest news and updates for EQ2.

EverQuest Lore Part 1, The Creation of Norrath – An Animated Intro to the Story of EverQuest

MMORPG.GG is proud to present the little side project that we have been working on lately. Below you can see the first part of our EverQuest lore video, detailing the creation of Norrath. The story has been taken and edited from the official lore which can be found at https://everquest.fandom.com/wiki/Lore More lore videos are coming …

Read More about EverQuest Lore Part 1, The Creation of Norrath – An Animated Intro to the Story of EverQuest

Everquest 2 has launched yet another special ruleset server. This time around it’s Kael Drakkel, a Lore and Legends server, which is a type of server that promised to make all content in the game relevant. On Kael Drakkel you will start at level 90 with a full set of level 90 gear. As you …

Everquest 2 (Which we recently reviewed) has released a roadmap for 2022, and it seems that Daybreak has big plans for Everquest’s little brother this year. Already this month, there are some exciting things happening in EQ2 as the Kaladim TLE server will unlock the Age of Discovery expansion, and the game will be getting …

Everquest 2 Review – Is EQ2 Worth Playing? [Visions of Vetrovia]

Read More about Everquest 2 Review – Is EQ2 Worth Playing? [Visions of Vetrovia]

Everquest 2’s latest expansion is finally live after a bit of a troublesome launch yesterday. The launch of Visions of Vetrovia initially caused some database issues, so Daybreak Games had to take the servers down for a whole nine hours to restore the game. Visions of Vetrovia increase the EQ2 level cap to 125 and …

EQ 2’s Visions of Vetrovia expansion can now be pre-ordered. The expansion will increase the level cap to 125, introduce Tradeskill Blueprints, as well as new content and zones. Inspired by mystical visions, a crew of explorers—sailing the uncharted waters beyond the Shattered Seas—has found an isolated continent plagued by dark curses and discordant energies. …

Daybreak has announced the next Everquest 2 expansion. It will be titled Visions of Vetrovia. A date for the pirate-themed expansion has not yet been set but the prelude adventure has already started. This prelude adventure includes three new repeatable tradeskill quests, four new adventure quests (three of which are repeatable), three new collections, and …

Players can now take up battle against Emperor Ssraeshza and the Shissar as they explore Vex Thal and the Plane of Shadows in Game Update 117: Whispers of Tyranny. The update brings with it new quests, missions, a new overseer season, raid, heroic and solo dungeons, and more.

Read More about Everquest II Whispers Of Tyranny Is Live

Brewday Is Back In Everquest 2

Brewday is once again back in Norrath (at least in EQ2). From today March 5th until March 18th players can join in on the celebrations of Brell by using the portals in Commonlands, Antonica, Greater Faydark, New Halas, and Haven.

Read More about Brewday Is Back In Everquest 2

Everquest 2 Reign Of Shadows Is Live

EverQuest II’s Reign of Shadows has officially launched, bringing the Vah Shir race into EQ2, almost 20 years after they were introduced in the original. Other features of the expansion include 10 Reign of Shadows prestige abilities, increased Maximum Guild Level, a new Adventure, and more. Full patch notes can be read on Everquest.com. Get …

Read More about Everquest 2 Reign Of Shadows Is Live

The latest update to Everquest 2 has been released, titled Reignite the Flames. The update takes place in Solusek’s Eye which is an area known to most Everquest fans. The update introduces two new raids, Fabled Plane of War and Solusek’s Eye, and a heroic dungeon. Along with 4 new adventure quests and a new …

Read More about EQ2 GU 115: Reignite The Flames Is Out Now